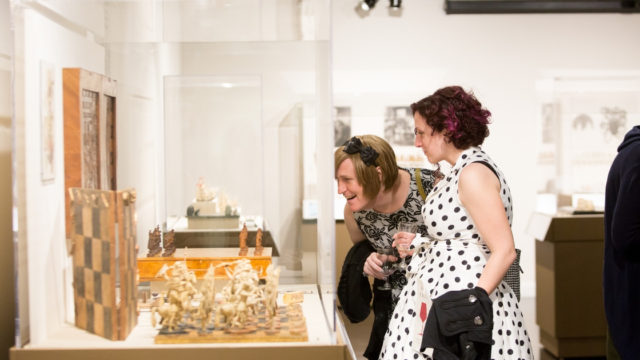 by Family Attractions Card in Family Fun, Live Like a Local category

Tucked into the hustle and bustle of the Central West End in St. Louis is the World Chess Hall of Fame, a non-profit that honors the ancient art of chess by recognizing players, hosting themed workshops and encouraging the next generation to participate in the tradition.

Let’s face it: the language of chess isn’t often a part of one’s everyday vocabulary.

Aside from the occasional, “Checkmate!” we don’t hear the words Kriegspiel or Zwischenzug casually tossed about in general conversation. We might be bold enough to think we have an inkling for what the term bad bishop could possibly mean, but in all honesty, we straight up Googled it.

This is where the World Chess Hall of Fame comes in.

While the goal of the game in chess is to checkmate the other king, the goal of the World Chess Hall of Fame aims to help the community become fluent in speaking the language of chess.

While it may not be their verbal mission statement, consider it their unspoken calling, their true purpose, their great commission. Because to many, chess seems like a foreign language. But once understood, it opens endless opportunities. Interpretation is the key to appreciation!

“The mission of the World Chess Hall of Fame is to educate visitors, fans, players, and scholars by collecting, preserving, exhibiting, and interpreting the game of chess and its continuing cultural and artistic significance.”

Like several of our favorite attractions in St. Louis, admission to the World Chess Hall of Fame is completely free, making it that much more accessible to the surrounding communities.

Plan your visit, view new exhibitions, and take part in upcoming music events or public programming. This is an iconic St. Louis destination that you don’t want to miss!

Before you step out to stroll through the Central West End, stop into the Q Boutique and show your Family Attractions Card for a free “Chess 2 Go” chess set!

And once you become a bit more fluent in chess-speak, let us know. We’re practically on grandmaster level. Just saying.