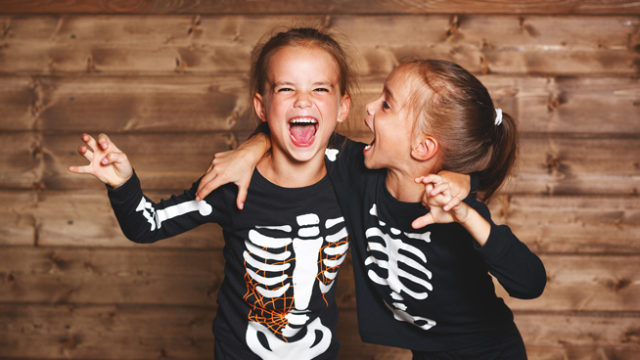 54 Halloween Jokes for Trick or Treating 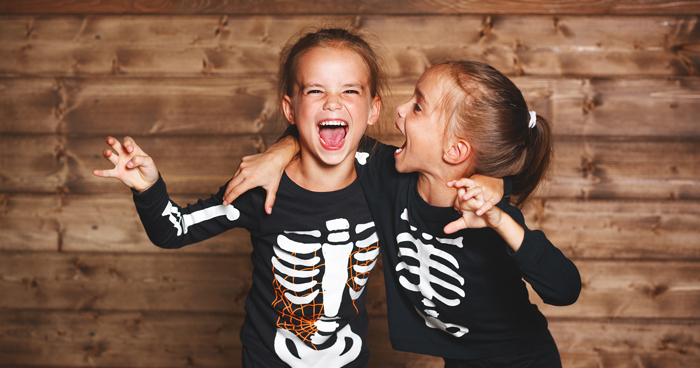 Use these spooky jokes for trick or treating on Halloween!

Jokes for trick or treating in St. Louis is totally serious. If you’re a local kid and you don’t have a Halloween-themed joke prepared when your neighbor answers the door, don’t expect to score a full-sized candy bar. St. Louis is one of the only places in the U.S. where kids have to tell jokes to get candy on Halloween! Only St. Louis residents know how landing perfect corny jokes for trick or treating makes you the star on the block. When your heart is set on candy, but all eyes are on you, don’t freeze under pressure!

Have your kids study up on these Halloween jokes for trick or treating and share them with their friends. If they memorize a couple, they’ll be sure to impress the candy-bearers next door with their impeccable delivery.

Here are more than a few of our favorite Halloween jokes for trick or treating to try out this year:

1. Why did the Cyclops give up teaching? He only had one pupil!

3. What do you call a hot dog with nothing in it? A “hollow-weenie”.

4. Why do witches fly on brooms? Because vacuum cleaners are too heavy.

5. How do you write a book about Halloween? With a “ghost-writer”.

6. What kind of music do mummies listen to? “Wrap” music.

7. What happened to the guy who didn’t pay his exorcist? He was “repossessed”.

8. Why didn’t the skeleton go to the party? He didn’t have any “body” to go with.

9. What does a vampire never order at a restaurant? The “stake” sandwich.

10. What do skeletons say before they begin eating? “Bone” appetit!

11. Who did Frankenstein take to the prom? His “ghoul friend”.

12. What do you get when you cross Bambi with a ghost? Bam-BOO.

13. What did the ghost say to the host at the party? I’m only here for the BOOS!

14. How do you fix a broken Jack-o-lantern? With a pumpkin patch.

15. Why was the skeleton afraid to cross the road? It had no guts.

16. How do monsters tell their future? They read their “HORROR”-scope.

18. What does a ghost get when he falls and scrapes his knee? A “boo-boo”.

20. What do you call someone who puts poison in a person’s corn flakes? A “cereal” killer.

21. What does every ghost receive to start their rock collection? A tombstone.

22. What did the skeleton say to the bartender? I’ll have two beers and a mop.

23. What hunting tools do Australian ghosts use? BOO-merangs!

24. Why do demons and ghouls hang out together? Because demons are a ghouls best friend!

25. Why is a ghost so bad at lying? Because you can see right through him!

26. What do goblins and ghosts drink when they’re thirsty on Halloween? Ghoul-aid!

28. Where do baby ghosts go during the day? Dayscare centers!

29. Which ghost is the best dancer? The Boogie Man!

30. Two monsters went to a Halloween party. Suddenly one said to the other, “A lady just rolled her eyes at me. What should I do?” The other monster replied, “Be a gentleman and roll them back to her.”

31. What treat do eye doctors give out on Halloween? Candy CORNeas.

32. Why did the monster eat the lightbulb? Because he needed a light snack!

33. How does Darth Vader like his toast? A little on the Dark Side.

34. What is a witch’s favorite subject in school? SPELLing!

35. How are vampires like false teeth? They both come out at night.

36. Do zombies eat popcorn with their fingers? No, they eat the fingers separately.

37. Why did the witches’ baseball team lose? Because all their bats flew away!

38. Why don’t angry witches ride their brooms? They’re afraid of flying off the handle.

39. What do you get when you divide the circumference of a jack-o-lantern by its diameter? Pumpkin Pi.

40. What’s worse than being a five-ton witch on Halloween? Being her broom!

41. Why is it hard to have twin witches as your friends? Because you can never tell which witch is which.

43. I threw a boomerang at a ghost the other day. I knew it would come back to haunt me.

44. Thank goodness for Halloween, all of a sudden, cobwebs in my house are decorations!

45. On what road does the zombie family live? The dead end!

46. What is a vampire’s favorite mode of transportation? A blood vessel.

47. Two ghosts are in a jail cell. The first says, “Hey I’m in for disturbing the peace. What got you in here?” The second ghost says, “Possession.”

48. Why did the monster eat bullets? She wanted her hair to grow out in bangs!

49. What happens when two vampires meet? Love at first bite!

50. What is a scarecrows favorite fruit? STRAW-berries.

51. Why is a cemetery a great place to write a story? Because there are so many plots there!

52. Two monsters were at a Halloween party when one said to the other, “A lady just rolled her eyes at me. What should I do?” The other monster replied, “Be a gentleman and roll them back to her.”

53. Riddle: What is something the maker doesn’t want, the buyer doesn’t use, and the user doesn’t see? A coffin.